At 6:00am, as the stars were shining, Battles O'er was played at the War Memorial and then at 11 :OOam a large number of people came to the Memorial Green to pay their respects to the men of Caston and all those who had died in war, probably twice the normal number, ages ranging from 6 to 91.

Maroons were fired to mark the two minutes silence echoing the gun fired by The Kings Troop on Horse Guards Parade. This was followed by an Act of Remembrance, wreath laying and a short service.

At 6:55pm the torches approaching the War Memorial was a truly memorable sight.

The torch bearers had walked slowly starting from the vicinity of where the men used to live in the village. For Jim Bambridge and Herbert Cooper from Northacre, for Fred Corley from Northacre Arch, for Dick and Edgar Hannant from Midsummer/Bilhams Cottage, for Robert Reynolds, Albert Reynolds and Lenny Tye from The Chase, for Harry Green from Evergreen, for Harry Cator from Pockthorpe (Dukes Lane), for Jack Lawes from Eastcroft and for George Anthony from The Old Forge. From the east, for Edward Hunt and Horace Tye from Bridge Cottages and for Reggie Partridge from The Old Rectory.

At 7 0' clock the Last Post was sounded then followed a fifteen minute silence. The torches were then placed behind photos of the men. The Centenary wreath was laid before the playing of Flowers of the Forest and Battle O'er. 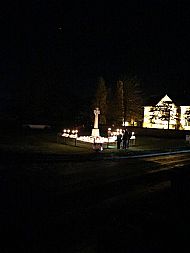 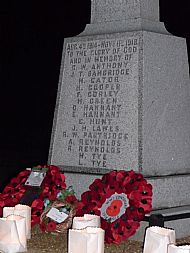